(November 12, 2017 – Plano, TX) Unfortunately, there wasn’t enough juice left in the Spirits (Trinity) offensive tank on Sunday as the squad fell just short of reaching its goal in the NTABL Fall Baseball, Trinity Division Championship game against the Dallas Nationals. Earlier this season, the Nats beat the Spirits by a margin of 1 to 0 during a game where Spirits pitcher, Craig Molldrem was on fire. During Sunday’s match-up, the outcome was almost identical to the regular season game between the two clubs and once again, Molldrem was terrific. The Spirits offense however, was shut down by a combination of Nats pitching that allowed just three hitters to reach base with four others drawing walks. The ghosts weren’t able to plate a runner despite runners on first and second in one inning and loading the bases in the seventh.

“Today just wasn’t our day,” commented a disappointed, John Showalter following the game. “We’ll keep our heads up, but part of me feels like we really let Craig (Mollrem) down today. You pitch a game with 14 strikeouts, you should be walking away with a win. I assure you that this will only make us extremely hungry next year. It’s a heart-breaking way to end the season, but hats off to the Nationals and their pitching. I feel like we’re mirror reflections of one another, however they were able to get it done today. We’ll be back and we’ll be razor-focused on finishing the job next season.”

Following a game where they were defensively flawless during the playoff semi-final, the Spirits ran into just two fielding errors but they proved to be costly in the championship game’s outcome. Cliff Brade and Thomas Stoltz started by going down on swings before Eric Goetz singled with two outs in the first, however Nationals pitcher, Zach Freeman was able to get JR Rivera to fly out to end the inning. Steve Garrabrants added a two out single for the Nats after Molldrem struck out the first two hitters, however he was able to get Justin Soto to ground out to end the first.

Freeman gave up a base-on-balls to Molldrem in the second before striking out the side, and Molldrem returned the favor to the Nationals hitters in the bottom half of the inning. Mike Werner added a single in the third, but again Freeman struck out the side to kill any rally opportunity. Molldrem once again played copy-cat by striking out the next two he faced before Dee Mauldin singled and Jordan Hebert wore a pitch. Molldrem was able to get Steve Garrabrants to ground out and the game remained tied at zero after three complete.

Rivera drew a free pass with one out in the fourth and Showalter wore a pitch to put two on with one out and the Spirits appeared poised to push a run across after Molldrem singled, however the Nationals defense was able to catch Rivera on the base paths before Molldrem was able to earn the offensive hero opportunity. Freeman was able to get Mike Anderson to ground out and again the game remained scoreless.

Both teams went down in order for the remaining frames, trading three up, three down until the seventh inning when Matt Garrabrants replaced his starting pitcher with Tim Hanan. Rivera drew a lead off walk Showalter turned to speedy, Justin Anderson to replace Rivera on the base paths and then attempted a sacrifice bunt to push Anderson over. Showalter’s bunt was perfect and he was able to reach first safely and the Spirits had two on with nobody out. Both runners advanced to scoring position on a wild pitch from Hanan, but Hanan recovered and was able to strike out Molldrem for the first out of the inning. Mike Anderson drew a walk to load the bases and the Spirits were a fly ball or a hit away from taking the lead. Duane Aponte followed with a ground ball to the infield that was fielded cleanly and the Nats were able to get Justin Anderson forced at the plate for the second out, with Aponte reaching on the fielder’s choice. Hanan and the Nats defense was able to foil any hero opportunity for JP Seider however, by getting the Spirits slugger to ground out to kill the rally.

The game seemed headed for extra frames after Molldrem started the bottom of the seventh by striking out Steve Garrabrants, but Freeman and Soto followed with a pair of singles to give the Nationals life. Both runners advanced on a fielding error by the Spirits outfield and it setup the opportunity for Matt Garrabrants to be the hero for his team and he delivered. Garrabrants hit a chopper between Showalter at third and Stoltz at short. Stoltz charged the ball, poised to field and throw home where Freeman was charging for the walk-off, however his fielding-to-throw transfer was muffled and Freeman crossed the plate safely and the Nationals were Fall Champions.

The Spirits would like to thank it’s players, family members and supporters, and any fans who shared the 2017 campaign with the team. Stay tuned for off-season awards and other Dallas Spirits Baseball Club news by visiting us at www.spiritsbaseball.com. 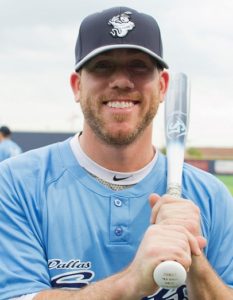