(July 28, 2017 – Dallas, TX) A number of Dallas Spirits players are preparing for this weekend’s festivities at Dr. Pepper Ballpark in Frisco, TX. The NTABL holds its Charity All-Star Games every summer, inviting top players from each team and each league to compete in exhibition games that will be held this year on Sunday, July 31, 2017 beginning at 8:30AM. Gates open for fans starting at 8:00AM and the park’s lazy river will be available for family, friends, and children.

All proceeds raised by the event are donated to the Texas Scottish Rite Hospital for Children. The event raises nearly $25,000 annually for the kids and provides the players an opportunity to be part of an incredible fundraising event, as well as an opportunity to play baseball and compete on a Minor League Baseball Field.

Dallas Spirits Baseball Club manager, Shawn Lee is no stranger to the event, volunteering time for both the league and the ball club to make the event special for his players, friends, family, and guests. “It’s really something all of us look forward to. The name of the event speaks volumes for where the league’s priority is, and that’s raising money for the kids. We get a great following from players and their families and we truly try to make it fun for the kids in need and all of our families and friends who can attend.”

This year, a number of players were voted from three different teams that compete for the Spirits, including the Spirits (18+), Spirits (35+), and Spirits (45+). Players voted in this season include: 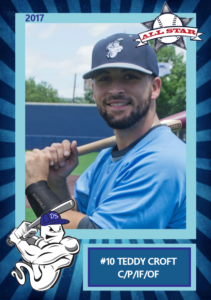 Teddy Croft is in his first season with the Spirits (18+) squad has made an impact from day one. Croft leads his team with a .581 batting average while currently standing at third on the team in extra base hits. Croft is a solid performer behind the plate at catcher, and has provided additional utility duties at shortstop and in the outfield. This is Croft’s first All-Star selection with the Spirits. 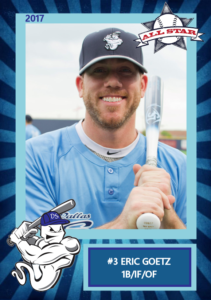 Eric Goetz is also in his first season with the Spirits on the inaugural Spirits (18+) squad. Goetz was a unanimous choice from his teammates, earning his first trip to the All-Star Game as well.  Goetz is second on the team in batting average, currently hitting .543 and leads the team in total hits, at 25. 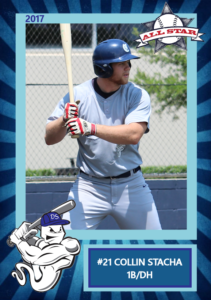 As another unanimous vote, Spirits (18+) slugger, Collin Stacha also makes his first All-Star appearance with the ball club. Known throughout the league for his power, Stacha lines up at number four in batting average, currently hitting .444, while leading the team in walks at 12, hit-by-pitch at 10, extra base hits at 10, and home runs, with 2. Stacha has a ridiculous .633 on base percentage, while also boasting an .833 slugging percentage. 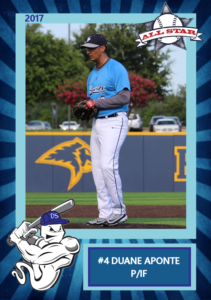 Duane Aponte joins Goetz and Stacha as the other unanimous vote-getter, making is first All-Star appearance as a Spirits (18+) ace pitcher. While only showing a .231 average, Aponte makes the most of his appearances at the plate. Aponte is tied for second on the team with 6 extra base hits, while also standing second in RBIs with 16. Defensively, Aponte’s impact as been the role of pitching ace, collecting 10 wins thus far in 2017, while striking out 36 opposing hitters and carrying an ERA of 2.56. 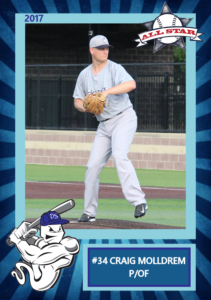 Craig Molldrem takes All-Star honors home for the second straight season. Despite being unable to play in this year’s events at Dr. Pepper Ballpark, Molldrem currently leads the NTABL Veterans League and his team with 12 victories. As the 2016 NTABL Pitcher of the Year and Spirits (35+) Team MVP, Molldrem is no stranger to success. The former Marlin’s product is third on the team in hitting in 2017, batting with a .517 average, tied for second with 7 walks, third on the team with 13 hits, and second in runs batted in, with 14. Molldrem is blazing through the league’s hitters, having struck out 139 which averages to 11 strikeouts per game, while carrying an ERA of just 0.74. 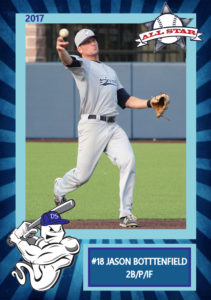 Jason Bottenfield also revisits the rank of All-Star in 2017, his second trip as a Dallas Spirit. Bottenfield won’t be available to attend in 2017, but easily ranks among the top on his team both defensively and offensively. Leading the team currently with a .542 average, Bottenfield fifth on the team with 13 hits, including 3 extra base hits. Bottenfield is relied upon for great defense, typically at second base, and you can expect at least one of those plays to make the highlight reel each game. 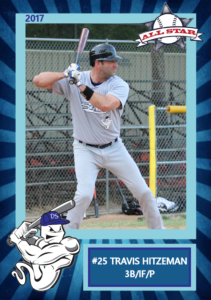 Travis Hitzeman earns his first All-Star vote in 2017, receiving a high volume of votes in his inaugural season with the Spirits (35+) team. Hitzeman will be unavailable to attend the games in Frisco, TX this season, however his impact has assisted the team to its current 15-1 record and first place standing in the NTABL Veterans League. Hitzeman is currently batting .409, with 1 home run and currently a third place standing in runs batted in, with 13. Hitzeman is a solid defender and can be relied upon to pitch when needed. 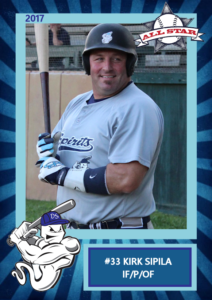 As a unanimous selection in 2017, Kirk Sipila revisits the All-Star ranks with the Spirits (35+) squad. Sipila makes his fourth trip to the big game as an annual MVP vote-getter, while chasing the team batting title with a .526 batting average. Sipila currently ranks second in hitting, while leading the team with 20 hits, first in RBIs with 16, second in runs scored with 19, tied for first with extra base hits with 5, and first in walks with 8. Sipila has utility skills being able to play nearly any position when called upon and effectively. As team manger of the Spirits (45+) squad, Sipila’s leadership both on and off the field contributes to the team’s and club’s success. Sipila will make is second appearance as a Spirits (45+) All-Star, where he ranks first on the team with an astounding .656 batting average. He leads the team in hits with 21, third in runs with 10, first in extra base hits with 6, and first in RBIs with 18. Defensively, Sipila holds his own on the mound as well, where he currently stands with a 3-0 record, sporting 16 strikeouts with a 1.20 ERA. 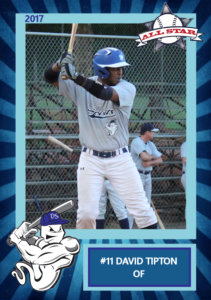 Congratulations go out to David Tipton, the Spirits (35+) and (45+) starting center fielder. Tipton was a top vote receiver on both squads and impacts his teammates as not only a team-favorite in personality, but as a solid defender and hitter in 2017. On the Spirits (35+) squad, Tipton is hitting .409 with 9 hits, 7 runs scored, and 6 RBI. He’s third on the team with 6 walks and second on the team in stolen bases with 5. On the Spirits (45+) squad, Tipton is currently hitting .370, tied for third with 10 hits, second with 12 runs scored, also having batted in 7 runs and leading his team with 8 stolen bases. Tipton’s defense is solid and he’s relied upon for a great arm and great throws when runners get greedy on the base paths. 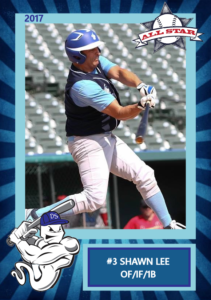 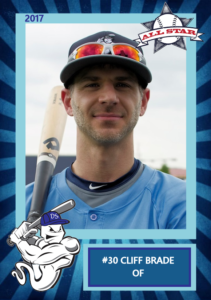 Cliff Brade returns to the NTABL All-Star Games for the second straight season, this year once again representing the Spirits (35+) squad. Brade stands fourth on the team in average, currently hitting .486. He’s second on the team with 18 hits, while land-sliding the rest of his teammates in runs scored at 26, and stolen bases, with 18. If you add in is 25 stolen bases with the Spirits (18+) squad, Brade is accountable for 43 total base-swipes in the 2017 summer baseball season. Brade is relied upon for his obvious speed, but carries with him a great bat and glove to also match a great throwing arm. A solid lead-off hitter even without warming up, Brade can be expected to boost any team’s stats when he plays. 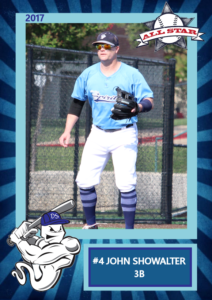 John Showalter makes his first appearance as a Spirits (35+) All-Star in 2017. A solid third baseman with a great arm, Showalter also displays power at the plate. Standing at a .366 batting average, Showalter is tied for fourth on his team with 15 hits, second with 4 extra base hits and having scored 7 runs. Showalter is also the team manager for the Spirits (18+) squad and has led his squad to a 17-3 record and 2017 NTABL Open American League regular season championship and number one seeding as his team enters the playoffs. 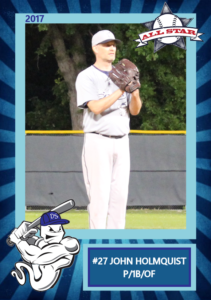 John Holmquist makes his third straight trip to the NTABL Masters League All-Star Game. Holmquist was the top vote receiver as pitcher, and his role as the team’s starting pitcher continues in 2017. A two-time winner as the team’s “Big Spirit,” Holmquist’s stature at 6’6″ shows big on the mound, too. Holmquist is currently 2-2 as a starter for the Spirits (45+) squad with 8 games played. He’s second on the team with 12 strikeouts, while holding a 3.46 ERA. Holmquist has been replied upon for additional roles in 2017, both offensively and defensively, playing solid in the outfield when needed and also at first base. Holmquist is batting just under .300. 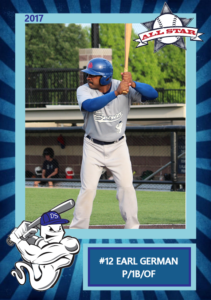 All fans are welcome and the team looks forward to anyone who can attend, and more importantly, help out the kids at Texas Scottish Rite Hospital for Children. If you can contribute, please click here to go directly to the Hospital’s website for a tax-deductible donation. Please select any one of the Dallas Spirits teams listed under the Supported Team field while completing your online donation. Thank you for your support and the team looks forward to seeing you at Dr. Pepper Ballpark!