(July 22, 2020 – Euless, TX) Hits and wholesale runs were in full force Wednesday night as the Spirits (40+) lit up the box score on their way to a 14 to 4 win against the Brewers in DFW-ABA action. The team finished with 16 hits as David Tipton led the way with a 3-for-3 night that included a pair of doubles and runs scored, 3 runs batted in and a stolen base. 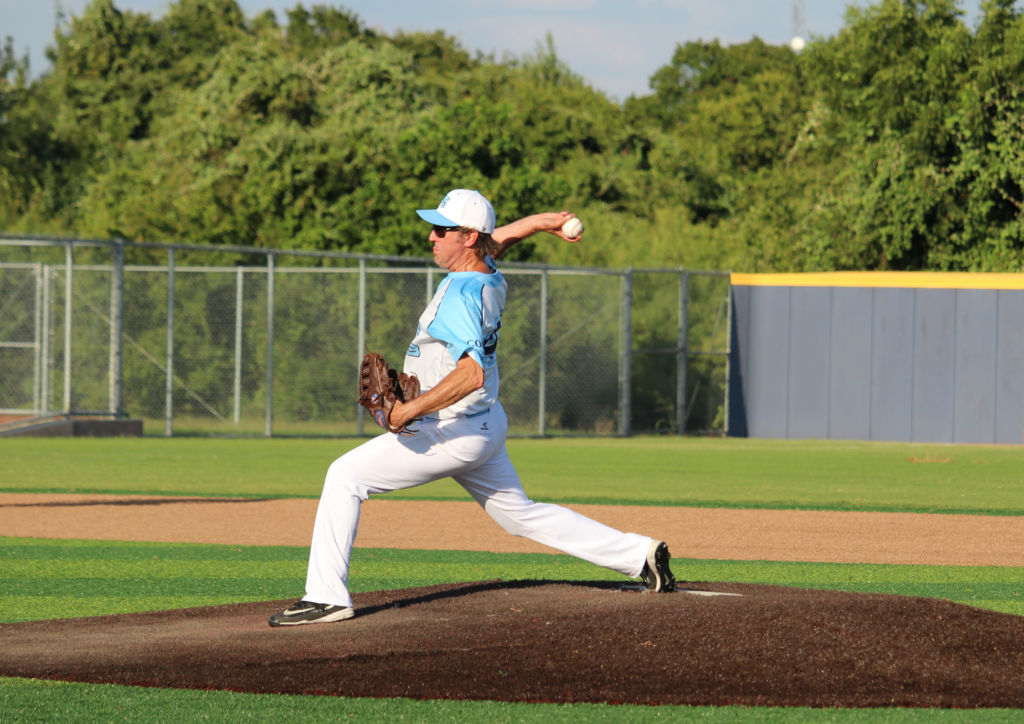 Spirits pitcher, Stacy Scott delivers a pitch against the Brewers. Scott added a pair of hits offensively with 3 runs scored. The Spirits went on to win the game, 14 to 4.

Stacy Scott picked up the victory on the mound, allowing just 3 hits while walking 4 and striking out 1. Bobby Kornhauser picked up an inning of work as the Spirits went big offensively in a shortened game due to the league’s mercy rule.

After the Brewers were held scoreless, the Spirits unloaded for 4 runs in the bottom half of the inning after Scott singled with one out. Both Kirk Sipila and Travis Hitzeman followed with back-to-back singles and Shawn Lee crushed a double to the left field wall to score both Scott and Sipila. Kornhauser flew out but Tipton kept the inning alive with a 2-run double to give the Spirits a 4 to 0 lead before Brant Finchum grounded out to end the inning.

The Brewers started the second with a lead off single by Jerry Hudson and Rich Beller was able to draw a walk off of Scott, but the Spirits took down the next three hitters in order to get out of the inning. The team then opened up for another pair of runs in the second after Eric McPherson singled with two outs and advanced on Scott’s second single on the night. Sipila then blasted a triple to the right-center field gap to score both runners and the Spirits were up, 6 to 0.

The Spirits added another run in the third after Tipton reached on a two-out single and later scored after swiping second and then making his way to the dish on an RBI single from Finchum.

The squad then added insult to injury in the fourth by putting up 7 more runs to go up 14 to 0 after McPherson led things off with a double. Scott reached on an error and both runners advanced on a wild pitch that allowed McPherson to score. Scott later scored on an RBI single by Hitzeman and after Lee drew a walk, both runners advanced and Hitzeman scored on an RBI single from Kornhauser. Lee was able to score after Tipton hit his second double of the game and after Finchum loaded the bases on a walk, Kornhauser scored when John Hefner grounded out and the Brewers infield made a mistake not trying to turn two. The blunder cost the Brewers another pair of runs after Aaron Wilson singled to score both Tipton and Finchum.

After Kornhauser dusted off his arm to get back into the Spirits rotation, the Brewers rallied for 4 runs on 3 singles, two hit batsmen and a pair of fielder’s choices executed by the Spirits defense before the game was called due the mercy rule.

“Great job by the guys tonight,” mentioned Sipila after the game. “Nice to see the bats in action tonight and we were able to get some work in for Scott and Kornhauser. We seem to be on or off offensively and that’s reflected in our record right now as a .500 team, but hopefully we’ll grow from this and get some momentum going as we head into August and down the stretch. Great game overall from everyone.”

The squad returns to action when they meet up with their roots in the form of the Cubs, a team where most of the existing Spirits Baseball Club evolved from 8 years ago. Game time is scheduled for 8:45PM on Arlington Field at Texas Star in Euless and you can click here for more schedule details and to learn how to download the iScore Central app to listen to the game live online! 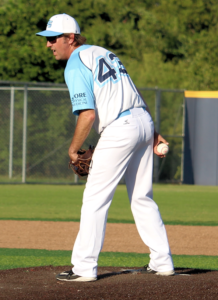 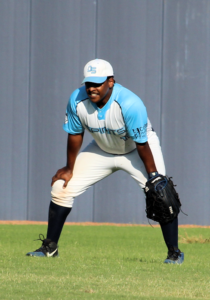