(June 6, 2016 – Carrollton, TX) – Typically your themes of past Spirits Baseball seasons have been offense. The team is known for great hitting and the offense has typically been feast or famine. Offensively, the Spirits (45+) squad has looked great this year with one particular hiccup against the Orioles, however the updated themes for both Spirit squads in 2016 has been pitching.

Outside of recent success on the Veterans team, the Masters have seen some dialed-in pitching as well and the man behind the control this season is All-Star pitcher, John Holmquist. Holmquist, or “Quisp” as his teammates affectionately refer to him has mastered his control this season. He currently holds a 1.87 ERA thus far in 2016, with a 2-1 record and only giving up 4 earned runs. He stayed true to his numbers Monday night, only needing 57 pitches with over a 2 to 1 strike to balls ratio holding the Dallas Bulls scoreless in a 1-hit shoutout gem that featured 7 strikeouts. As a matter of fact, Holmquist shook off the call of catcher, Tony Davis which lead to a slap single into center field just over second base, costing John a no-hitter. Holmquist was in great spirits after the game, shaking his head and taking pokes from his teammates on the decision.

“I should have listened to Tony, he’s the veteran catcher,” noted Holmquist following the game. “He called one, I wanted two, and it cost me that single darn it.” Clearly Holmquist has nothing to be ashamed of as his command and control strengthened each time he caught himself behind in a count. Twice he stretched the count to 3-1 and came back to strikeout Bulls hitters.

“John pitched a hell of a game,” noted a happy team manager, Kirk Sipila following the contest. “Since the 16-1 whooping we took from the Dallas Orioles where we had countless errors defensively and no offense whatsoever, we’ve proven to be much better than that particular outing. Following that train wreck, we’ve only allowed 3 runs and have scored 28. That’s all around winning baseball!”

Sipila was clearly positive about the performance of his pitcher, mentioning he didn’t recall the last game the team played perfectly (no errors) defensively. Adding to the list of the game’s accolades was right fielder and utility man, Brant Finchum. Finchum was 3 for 3 from the dish, including his second triple of the season along with a pair of singles, and 4 RBI. His base-clearing triple in the fifth inning appeared to be the dagger that broke the Bulls spirits. Finchum has been on a tear as of recent, currently hitting .467 with a team-leading 8 runs batted in.

“Outstanding performance by Finchum,” noted Sipila. “He’s proven to be a super utility guy this season.” Sipila made light of Finchum’s ability to play any position on the field. In fact, outside of first base, he has in fact played every position on the field in the past few seasons. At 52 years of age, Finchum defies the odds of “Father Time,” putting full effort into any spot he plays. And like Holmquist, he handles it with dignity and without feedback. The team is grateful for the efforts of both players, no doubt why Holmquist is a two-time, back-to-back “Spirit Award” winner and All-Star and why Finchum is always in the running and an annual All-Star himself.

Left fielder Shawn Lee stayed hot adding a pair of hits and scored two runs as part of the Spirits offense, while Sipila, Patrick Bilgere, and Chris Lewis all added singles. Additionally, Finchum and Bilgere each scored 3 times resulting in 6 of the team’s 11 runs.

The Masters squad returns to action next Monday night, as they seek revenge against the Dallas Orioles. Game time is 6:30PM and the location is yet to be determined. Start time is subject to change, so please visit the team’s website for schedule details. Join the Veterans back in action this Thursday night in Carrollton, TX, as the Spirits visit Dallas Modoc at McInnish Park (Field #11). First pitch is at 6:45PM. 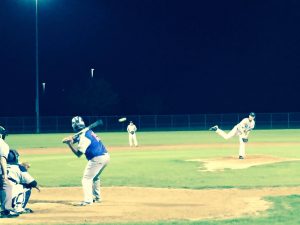