(July 28, 2016 – Dallas, TX) Pitcher’s dual appears to be the theme of big games for the Spirits (35+) team this season. Both teams were able to muster some hits, however the NTABL Veterans League squad utilized one big hit and more timely hitting which led to a 3 to 1 victory Thursday night over Modoc. Trailing a half game in the standings but with a victory over Modoc earlier in the season, the Spirits were able to claim sole position of first place with the win and hold a 2-0 record versus Modoc.

A pair of hits including a home run by Eric McPherson, a pair of singles by injured outfielder Shawn Lee, and a key single by Jonathan Duran sparked the Spirits offense and that proved once again to be enough scoring as the team stood behind the arm of pitcher Craig Molldrem. McPherson took the first pitch of his second inning at bat over the left field wall but not before some brief drama. The home plate umpire ruled the hit a ground rule double, indicating the ball hit the top of the wall and somehow defined the laws of physics to bounce directly back and into the air and toward the field of play. Fortunately for McPherson and the Spirits, the field umpire was able to see the ball cleared the wall and bounced back and upward after hitting the netting outside of the field of play.

“That one made us nervous,” mentioned Lee following the game. “Thankfully they got it right and Eric was given the hit he earned.”

McPherson’s solo shot gave the Spirits a 1 to 0 lead after 2 innings and the team was able to pick up another run the following inning. David Tipton drew a walk and Lee then singled to center. Lee, who has been plagued by a hamstring injury the past 3 weeks and was replaced with a courtesy runner giving the Spirits two on with nobody out in the bottom half of the third. First baseman David Dillon then singled to load the bases and brought up the top of the order. Cliff Brade popped out to third, but Duran once again played hero with timely hitting continuing his hitting streak with a line drive to left center scoring Tipton. Modoc was able to stop the bleeding for the short rally and after 3 complete, the Spirits led 2 to 0.

Molldrem was on point once again but Modoc battled for a few solid hits. “Craig’s a solid pitcher. There isn’t much that rattles him, so if we just play some good defense and get through the situations, we can work together and be a solid ball club,” continued Lee.

The Spirits defense was helpful and was able to shut down Modoc when opportunity was knocking. Jay Langston singled in the top of the fourth inning and advanced to second after Jerry Anderson singled. Langston advanced to third after tagging on a deep fly ball to center, giving Modoc runners at the corners with one out. Molldrem then made a pickoff attempt of Anderson at first and Dillon wasn’t able to handle the throw and Langston scored on the play. Molldrem then struck out Jason Rae and it took 10 pitches to finally strike out Ryan Van Campen.

With the score 2 to 1 in the top of the fifth, Modoc made some additional noise with a lead off single by Travis Rae followed with another single by Spencer Sherrard. Both runners moved over due to another Spirits error and were held to their bases after a nice play by Dillon getting Mark Moore to ground out at first. Molldrem struck out Josh Claudio and the ghouls snuck out of the inning unscathed after Jason Bottenfield made a great play at second. Eddie Paschall hit a medium grounder toward the middle side of second base and Bottenfield chased it down. He lost his footing however, with his feet sliding forward and fell to the ground. He then rotated and made a clean throw to first to end the inning.

“That was a heck of a play from Bottenfield,” continued Lee. He’s in rough shape too, playing with a very sore strained quad. There are a few of us in rough shape, five players injured in fact, but we were able to put a lineup together. Most teams will allow you to accommodate for runners who are hurt, but this was a particular scenario where that gentlemen’s agreement isn’t going to happen. We’ll just leave it at that. I’m just thankful to have guys that stick it out regardless of their ailments. Hat’s off to my guys.”

Lee was able to add his own slice of insurance following a single by Chris Lewis. John Show reached on a fielder’s choice and Lewis made it safely to third on an error by Jay Langston. Lee hit a soft line drive to right-center scoring Lewis, and the team led 3 to 1 after five innings. From there it was once again the Craig Molldrem show. Despite a sore back, Molldrem carried his team through the final two innings of play completing the game giving up no earned runs, giving up 8 hits, and striking out 9. The Spirits return to action next Thursday night as they visit the Cubs at Reverchon Park in Uptown. First pitch is at 6:30PM. The team is also scheduled to play this Saturday morning versus the Dallas Orioles at 9:00AM. Location is yet to be determined. 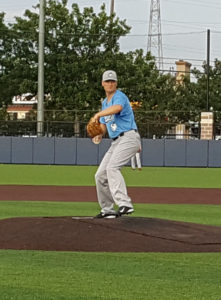 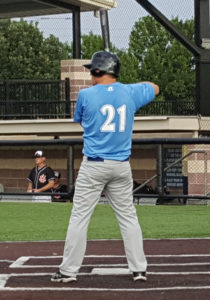