(August 25, 2016 – Dallas, TX) The Dallas Spirits (35+) captured the regular season NTABL Veterans League title Thursday night with a victory over the Dallas Cardinals. The team faced the birds for a pair of games to close out the regular season following cancellation of a previously rained out game against Modoc. In game one of the twin billing, the Spirits erupted for 17 hits off of Cardinals pitcher, Dustin Harrison.

Jason Bottonfield, Jonathan Duran and Shawn Lee, who returned to full action from a hamstring injury all led the way with 3 hits each. Bottonfield tripled and added a pair of hits alongside 2 runs scored and an RBI. Duran added a double, 2 hits, 3 RBI and a run scored, while Lee added a double and a pair of singles. Brant Finchum, Eric McPherson, and John Show also added two hits apiece, with Finchum and McPherson adding doubles as well.

Big arm Craig Molldrem again paved the way from the defensive side, shutting down Cardinal bats through 4 innings before former Spirit (35+) Patrick Bilgere slapped a hard line drive to right, scoring the Cardinals only run. Molldrem ends his no-hit streak at 10 innings following last week’s no-hitter against the Braves. Molldrem finished with 8 strikeouts, no walks, and 0 earned runs completing his rookie season with the squad at 10-2. Molldrem struck out 110 NTABL hitters and finishes the season with a 0.84 ERA.

“Craig was outstanding once again, and what a year for him,” commented Shawn Lee following his team’s victory. “That’s a good baseball team we played and no doubt we’ll be seeing them soon in the playoffs. They can hit and their bats showed up for game two. Not sure what happened to ours that second game, but we accomplished what we needed to tonight and our focus will continue toward winning a championship this season.”

The Spirits won the first game 10 to 1 but went on to drop an abbreviated second game by a score of 6 to 1. A pair of key errors combined with bats that came alive for the Cardinals in the second game appeared to be a recipe for disaster. Cardinals pitcher, and self-proclaimed slow-baller Jason Gutierrez silenced Spirits bats through the first 4 innings before Eric McPherson slapped a looping line drive just over the infield. John Show was the remaining Spirit to get a hit off of Gutierrez who seemed to lull the Spirits hitters to sleep with his knuckleball and slow curve.

“Yeah, we were a bit of Jeckyl and Hyde here tonight,” continued Lee. “Not sure if we were just coasting there after the initial victory or if Jason has our number, but we certainly went to sleep.”

The Cardinals unleashed for 12 hits of their own in the second game, ending pitcher Jonathan Duran’s perfect season. Duran was 4 and 0 going into the night but seemed to get exhausted pretty quickly in the finale of August heat in Dallas, which saw 99 degrees before the start of the evening’s games. Slugger Philip Bosco led Cardinals hitters with 3 hits, including a double. Bilgere and Juan Mollinedo and Jason New each added a pair of hits, including a double by Mollinedo.

With the victory, the Spirits win the outright regular season championship and earn the number one seed heading into the playoffs starting September 1. The team will be idle with a bye in round one and are scheduled to face the winner of the Orioles and Cubs match-up. Complete details of playoff bracketing, seeds, and match-ups can be found by visiting the NTABL website. 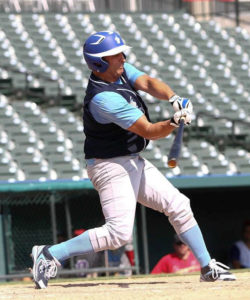