(July 10, 2017 – Plano, TX) The Caddo Reds surprised the Spirits (45+) squad Monday night, as they held on to walk away with a 2 to 1 victory in NTABL Masters League play at Graham Field in Plano.

The Spirits offense simply failed to show up, earning a single run on 5 hits, while leaving 6 stranded as the team seemed to have no answer for Reds pitcher, Dan Sosa. Former Spirit, Randy Brittain proved to be the hero as he collected two hits and both runs batted in, scoring Bret Baker two different times, which proved to be enough to set down the ghosts.

Kirk Sipila and Shawn Lee provided late-game heroics to make it interesting on the top half of the seventh. Down 2 to 0, Brant Finchum and Eric McPherson each grounded out to leave nobody on with two out. Sosa was able to even the count on Sipila to 2-2 and appeared that he would finish what he started by completely shutting down the Spirits offense, however the veteran and three-time MVP was able to take the next pitch opposite field and down the right field line for a double. Lee then settled in looking for a solid pitch to find some sort of rally in the evening and he struck pay dirt when Sosa delivered a hanging curveball on a 1-1 count which Lee promptly smashed to the left field wall for another double. Guy Koenig then entered the box looking for the hero opportunity. With speed at second, Koenig squared up looking to tie the game, however he missed on a 1-0 pitch that rolled slowly to third and the Reds defense was able to make the play easily to walk away with the win.

Sipila declined to comment following his team’s offensive implosion. The loss pushes the team to 8-3 on the season, a full game behind the Dallas Orioles at 8-1 and who also hold two victories over the club. The team returns to action next Monday night, where they hope to revive their offense as they visit the Dallas Bulls at Jesuit College Preparatory in Dallas. First pitch is scheduled for 7:00PM. 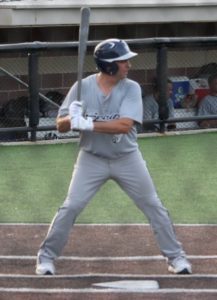