(July 25, 2016 – Carrollton, TX) The heat in the Dallas area finally gave everyone a break, including those playing baseball in the metroplex on Monday night. Unfortunately for the Spirits (45+) squad, their offense also remained on break as the team fell to the Dallas Rangers 8 to 0 at Graham Field on the grounds of Prestonwood Christian Academy.

Pitchers John Holmquist and Brant Finchum showed some command for most of the game with Finchum playing an outstanding game defensively. Finchum started at third base and made a few different remarkable plays for put-outs, including chasing down a foul ball when he was pitching. Brant made a running catch at full extension and crashed into the dugout barrier on the first base side, but held on long enough to record the out.

“Brant was a beast on the field tonight and it was great to see Randy (Brittain) starting to click from the plate,” mentioned coach Kirk Sipila following his team’s defeat. Brittain was the lone offensive highlight, as he was the only Spirit with multiple hits (2) during the contest. Sipila and catcher Tony Davis were the only other two players to get into the books, each with a base hit.

“You have to give Earl (German) a lot of credit for his effort from the mound tonight for the Rangers,” continued Sipila. “He had our hitters off balance all night. But this loss seemed a little different. We’ve had a few games where we knew were blew it, there was obvious frustration, but tonight I saw each of our guys verbally and mentally taking responsibility for this loss. We seemed to take this one hard tonight.”

Holmquist struck out two and gave up two runs (zero earned) in three innings before becoming sore. He pitched in the league’s All-Star game over the weekend, thus the need for a short outing. Finchum pitched well and the game was tight through five and a half innings before Rangers bats came alive. With a 3 to 0 lead in the bottom of the sixth, Finchum retired the first Rangers hitter and then Chris Allen reached base with a single. Jay Keeton and Randy Lash followed suit and bases were loaded with one out. Finchum proceeded to strikeout Gilbert Grenado and it appeared the Spirits would be in good shape coming around in the game’s final inning with a chance at chasing 3 runs.

However, German took a 2-1 pitch to opposite field and left fielder Dennis Gonzalez came up about a foot short on the diving catch that may have saved face. That cleared the bases and the Rangers put up two more before the inning ended providing the game’s final score. German shut down Eric McPherson, Shawn Lee, and Gonzalez in order to seal the complete game shutout.

“Pitching and defense appears to be our foundation, but the offense has had its moments,” indicated Sipila. “With six games remaining in the regular season, it’s time for us to get this train rolling in the right direction. We know what it feels like to drop close games and also what it’s like to get it handed to us and I think the guys are ready to flip the switch.”

The Spirits return to action next Monday night as they host the Dallas Bulls at 9:00PM at McInnish Park, Field #11 in Carrollton. 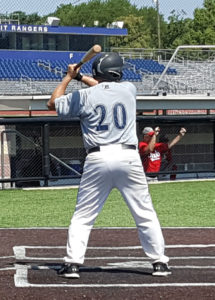