(July 16, 2018 – Carrollton, TX) The Dallas Spirits (45+) are your NTABL Masters League regular season champions! With an 18-8 offensive affair over the DFW Hurricanes, the ghouls raised their record to 14-1 atop the league’s standings and clinched the number one seed moving into the postseason, which will begin following three more games left to play.

The Spirits used a 7-run second and a 5-run fifth inning alongside two different 3-run frames to finally pull away from a Hurricanes team who appeared to have no intention of laying down and handing over the title. The two teams combined for 29 hits, with 18 from the Spirits and 11 from the Hurricanes. Brian Hackney led the way for the Spirits with a 4-for-4 performance form the plate, including 2 doubles, 3 runs scored, and 2 RBIs. John Holmquist, typically fulfilling the pitching role for the Spirits also highlighted the box score with a stunning performance from the plate, finishing 3-for-4 with a double and a bid at going “around the world.” Holmquist finished with 3 runs scored and 3 RBIs and finally, Jack Nash lit things up as well finishing the night 3-for-4 with 5 RBIs. Only two players from the Spirits lineup finished without a hit.

The Spirits started quickly with a 3-run first and did it with two outs to start off the inning. Earl German flew out and Eric McPherson grounded out before Hackney broke through with a double. Kirk Sipila walked and Guy Koenig also walked and the Spirits had bases loaded for Holmquist. Big John, as his teammates and wife like to refer to him followed by reaching on a Hurricanes fielding error, which allowed Hackney and Sipila to score. Holmquist stole second and Brant Finchum reached on another fielding error that was good enough to score Koenig before Hurricanes pitcher Bob Delahunt was able to get Nash to fly out.

The Spirits made it 10 to 0 after a 7-run second inning that started after Shawn Lee flew out to left. David Tipton singled and stole second and later made his way to third after German singled. McPherson followed with a single to score Tipton and advanced to second on a throwing error by the Hurricanes which subsequently allowed German to score as well. Hackney followed with a single that scored McPherson and Sipila reached on a fielder’s choice that squeezed Hackney at second. Koenig reached on another fielding error and a single by Holmquist was good to score Sipila. Finchum doubled to score Koenig and both he and Holmquist made their way to the plate after Nash doubled and the Spirits were cruising.

That was until the Hurricanes came to bat in the bottom of the second. German lost his command momentarily and the hits came out of the woodwork. Gann drew a base-on-balls to start the inning and a single by Paul Dominguez put two on with nobody out. Pruitt drew a walk and Delahunt reached on an error that allowed Gann to score. A single by Petty allowed Dominguez to reach the dish and another single by Helm scored Pruitt. Sean Judge went down on swings, but Gregory Anderson added an RBI single to score Delahunt and it was 10 to 4, Spirits. Thomas Mohler walked and scored Petty and Helm followed suit on a wild pitch from German. Gann eventually walked a second time in the inning but the Spirits defense rallied for a 6-4-3 double-play to retire Dominguez and to stop the bleeding.

The Spirits added 3 more runs in the fourth after Hackney and Sipila singled to start the inning and Koenig reached on a fielder’s choice that squeezed Sipila at second. Holmquist later singled to score Hackney and after taking second following a fly out from Finchum, both runners scored on a single by Nash.

The squad added 5 additional runs in the fifth when Tipton singled off of Mohlner, who had replaced Delahunt at pitcher. Tipton stole second and German drew a walk to put two runners on for the Spirits. Tipton then stole third and later scored after McPherson grounded out. Hackney followed with a double that scored German and a single by Sipila pushed Hackney to third. Koenig then lined out to center field, but an attempt to get one of the Spirits off base led to a throwing error that allowed Hackney to score and for Sipila to advance to third after the throw found its way to the Spirits dugout. Sipila then scored after Holmquist doubled to left-center field and after singles by both Finchum and Nash, Holmquist found his way to the plate to make it 18 to 6, Spirits.

The Hurricanes added a pair of runs in the bottom half of the inning to give the game its final score after Gann drew his fourth free pass to first via a walk by Tipton, who had replaced Holmquist on the hill. The short-lived, 4-pitch stint by Tipton turned into a salvage job by Finchum, who replaced Tipton as pitcher for safety reasons. Finchum was able to get Dominguez to fly out, but Pruitt followed with a single down the line and Delahunt followed by reaching base on a fielder’s choice after the Spirits tried to turn two. Pruitt eventually scored after Petty doubled and a single by Helm gave the Hurricanes their final run after Delahunt made his way to the plate.

The Spirits will return to action next Monday night as they return to Uptown, Dallas to visit the Caddo Reds at Reverchon Park. First pitch is scheduled for 6:30PM. The game will very likely be a preview of a possible championship when the postseason begins as the Reds currently hold the number two seed in the standings. Click here for schedule details, to obtain driving directions, or to download the iScore Central app to watch and listen to the game live, online! 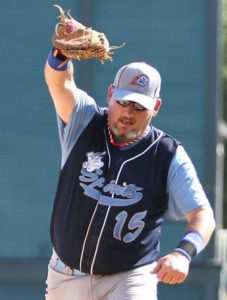 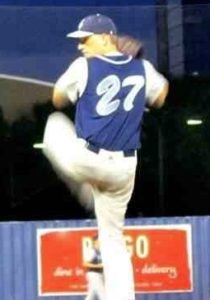 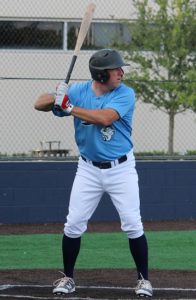