(September 15, 2021 – Euless, TX) Following an explosive top half of the first inning and a position in the driver’s seat to beat the league leading Redbirds, the Spirits (40+) squad could only watch opportunity turn to indecision as they game eventually turned out to a 7 to 7, tie in DFW ABA 40+ Fall League action Wednesday at Texas Star.

The offense blew up the first inning after Eric Goetz reached on an error to lead things off. Eric McPherson and Kirk Sipila loaded the bags with back-to-back singles and Travis Hitzeman followed with a grand slam home run to give the Spirits a 4 to 0 lead before the team went in order to follow.

The Redbirds wasted no time by following up with 3 runs of their own in the bottom half of the inning after Joe Lowry reached when Spirits starter, Jonathan Duran beaned him with a pitch. Lowry advanced to third on a single by Kevin Fought and Fought went on to swipe second base. Jerry Gamez hit an RBI single to score Lowry and move Fought to third, and Fought was then able to score when Dustin Harrison grounded out. Gamez moved later moved to third and scored on a sacrifice fly by Chris Cec and the game was now, 4 to 3 after Mark Tierny flew out to end the inning.

The Redbirds later tied the game at 4 to 4 when Lowry singled homed Lester Bedford, who had reached earlier on a single and then in the bottom half of the third, took a 5 to 4 lead after Gamez scored on a sacrifice fly by Tierny.

Following the fourth, the Cardinals increased their lead to 6 to 4 after Ethan Lopez singled and moved to second when Juan Mollinedo reached on a Spirits fielding error. Lopez later scored on an RBI single by Lowry, and the Redbirds held a two run advantage.

The Spirits then rallied for a pair of runs in the fifth after Shawn Hunt drew a leadoff walk and moved to second on a single by Stacy Scott. Earl German followed with another single to load the bags, and a walk to Duran scored Hunt to cut the Redbirds lead to one. Goetz followed with a single good to score Scott, but German was cut down at the dish trying to score for the second out. McPherson singled to load the bags a second time and the Spirits suddenly lost it a bit on the base paths. Sipila flew out and somehow confusion set in as Will Nash, running for Duran at third, failed to tag up and score. Nash had run up the line toward home on the contact and failed to wait for the outcome to tag and score. Goetz didn’t see that Nash held up and took off on a tag from second to move to third and had to doubleback after realizing Nash was still there. He was cut down at second for a double-play and the Spirits blew a fantastic opportunity to add runs. However, the blunder only allowed for two and the game was tied at, 6 to 6.

The Redbirds regained the lead in the fifth after Cec reached on a one-out single and moved to second on another single by Tierny. The third straight single, this time by Bedford, scored Cec and the Redbirds had a 7 to 6 advantage. Sipila then turned to German to mix up pitching and German was able to get Lopez to ground into a double-play to end the inning with the Spirits chasing a run.

The Spirits tied the game at 7 to 7 and both pitchers were able to stave off additional scoring opportunities and the game ended in a tie.

“Well, we ended with a tie, but it felt like a bit of a loss,” Shawn Lee commented following the game. “This is a team you want to beat when you have the opportunity. Sooner or later it’s going to be about seeding for the postseason, so coming up with a win here would have been big. Three errors defensively, but more importantly, poor decisions on the base paths and lack of base coaching hurt us and it showed by us getting a tie. We seem to put forward the effort both on offense and most of the time on defense, but base coaching is something we fail at. We don’t take it serious enough and tonight that hurt us. Something we definitely need to work on moving forward.”

The Spirits will waste no time when it comes to another solid opponent as they will face off against the Rattlers next Wednesday night. Game time is 8:45PM and location is Legends Field at Texas Star. Click here for schedule details. 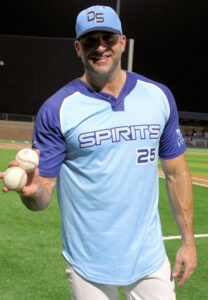