(April 20, 2017 – Plano, TX) It was another beautiful night for baseball in Plano on Thursday night as the Spirits (35+) hosted the new to the NTABL Veterans League, Astros at Carpenter Park. The squad raised their record to 4-0 behind the arm of Craig Molldrem and some big bats in the later portion of the game to seal a 12 to 1 victory over an Astros team that appeared poised to run neck and neck.

“We had ourselves a duel there in the early going,” mentioned team manger, Shawn Lee. “The first inning was a bit of an eye-opener. We’re not used to seeing someone jump on us right away and the Astros did just that with a lead-off single and the unfortunate timing of a wild pitch to get a runner in scoring position. They were able to get (Marcos) Vidal around and right off the bat we were down.”

Vidal led the game off with a hard single to right-center and then later took second when Molldrem went a little too high for catcher, Brant Finchum to catch up. Kevin Hull grounded out pushing Vidal to third and he was able to score after the next hitter flew out deep to right-field, completing the sacrifice fly. The Spirits were able to get Aaron Lowe to ground out to get out of the first, but found themselves in an unfamiliar position down 1 to 0.

The team appeared to be in business with two outs after Cliff Brade went down swinging and Chris Lewis grounded out. Slugger, Kirk Sipila drew a walk and later reached second on a wild pitch. With MLB veteran, DJ Carrasco at the plate it would appear the Spirits had an opportunity to tie the contest with a runner in scoring position, but Sipila was called out trying to take third base after another wild pitch and the Astros were out of the inning.

“Their catcher made a quick play on the ball, but I’m not certain how I felt about the call,” continued Lee. “There were a number of us that felt Kirk was safe at third. The throw was high, but unfortunately for us they gave them the call. We got a little shafted on another call later in the game too, but from his angle I’m sure it looked like an out.” Lee was referring to courtesy runner Jonathan Duran being picked off later in the third inning when Hull made a quick throw to first with runners at the corners. Duran appeared to have his hand in place on the bag, but between the quick throw and a hard tag, the umpire at second base saw it otherwise.

The Spirits remained poised behind Molldrem as he struck out the side in the second, despite a runner reaching on an error. The team bounced back in the bottom half of the second after Carrasco grounded out and Duran flew out. With two down, Lee singled up the middle and reached second after center fielder, David Tipton drew a walk. Both runners moved over on a past ball and Lee was able to score on a wild pitch to tie the game before Finchum went down swinging.

“You really have to give the credit to Finchum on the at-bat,” Lee noted. “Had he not hung in there in what was a really good at-bat, we wouldn’t have had the opportunity to get the run in there. Seemed that tying the game at that point really shifted our momentum.”

Both teams were shut down in the third and it seemed an old fashioned pitcher’s duel was in play. With a pair of strikeouts and some solid defense behind him, Astros pitcher, Kevin Hull looked ready to keep pace with Molldrem. As the teams moved into the fourth, the Astros started off the inning with a hard double to the right-center gap by Lowe. Daron Wilkinson then reached on a fielder’s choice after grounding to Molldrem on the bump. Molldrem was able to chase down Lowe who was caught between second and third and the lead runner was taken out of play. With one on and one out, Molldrem then took it on his own to strikeout the next two Astros to kill the rally. That’s when the Spirits struck offensive gold. Left fielder, Earl German drew a walk to lead off the inning as did Brade. First baseman, Chris Lewis then appeared ready to make the sacrifice to move both runners over as the Spirits coaching staff was discussing a sacrifice. However, Lewis had his own agenda as he took the first pitch from Hull into the right-center field gap, scoring German and advancing Brade to third.

“I chatted with Chris after the inning ended and asked him what he was thinking,” mentioned Lee. “I asked him if he and Patrick (Bilgere) discussed bunting and he said they had, but he told our coach that he was going to step up and crush the first ball he saw and he did it! I was impressed. Perhaps not our best strategy, but if a guy knows he’s going to hit, I’m ready to give him that opportunity.” Lewis’ big hit broke the tie and gave the Spirits a 2 to 1 advantage, but the scoring had only just begun. Brade then scored on another passed ball and Sipila drew another free pass to first. Dan Zier then came in to replace Hull on the mound for the Astros and the Spirits wasted no time stepping on the throttle. Duran reached on an error pushing Sipila to second, but Lewis was able to score on the play and the Spirits were up 4 to 1. Lee followed with a hard single down the left field line to score Sipila and Duran later scored after Tipton reached on an error. Finchum closed out the fourth inning scoring spree with a doubl deep to left-center field to score Lee and the Astros were able to stop the bleeding when Tipton was thrown out also trying to score and they were able to get Eric McPherson to pop-up.

Molldrem then struck out the Astros half of the fifth after a lead off single by Steve Smith and the Spirits came back with another big inning to seal what would turn out to become a big victory. Molldrem and third baseman, John Showalter drew walks and Bilgere was then hit by pitch to load the bases. German then singled to score Molldrem, and Brade reached on a fielder’s choice to score Showalter. Lewis collected his second big hit of the night to score Bilgere and Brade with a crushing double to the right-center field gap and then later scored when Sipila singled. Carrasco then saw his first opportunity to pitch for the ball club as he replaced Molldrem in the top of the sixth. Carrasco was able to get Lowe to fly out but gave up a single to Wilkinson before striking out the next two Astros to seal victory.

Lee finalized his thoughts after the game. “Slow start for us, but cooler heads prevail. That’s what you get from playing together for a few years. You add guys with veteran knowledge of the game like Earl, Finch (Finchum) Sip (Sipila), Patrick, Craig, DJ, and that’s a winning foundation. Great win for us. Chris Lewis was a beast tonight for us at the dish. And Molly (Molldrem) was ol’ reliable once again. We’re lucking to have him. We’re lucky to have a lot of these guys. We’re looking to stay focused and use any means we have to get a W. We’re deep this year with talent in every position, but more importantly, at the plate. Great group of guys. Looking forward to the rest of the season playing with this group.”

The Spirits play host to another new team, the Royals at Reverchon Park in Uptown, Dallas next Thursday night. First pitch is scheduled for 6:30PM. 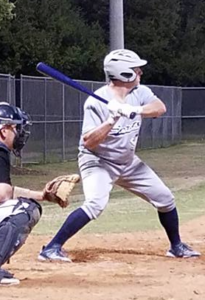