(June 15, 2017 – Dallas, TX) After two definitive wins over the Royals earlier in the season, the Spirits (35+) squad made it a hat-trick as they defeated the Royals Baseball Club 10 to 2 last Thursday night at Jesuit College Preparatory.

Cliff Brade, Travis Hitzeman, and Shawn Lee each added 2 hits to the Spirits box score as the team was limited to 9 hits during the 10-run production. After Craig Molldrem walked the Royals lead off hitter to start the game, the Spirits turned a pair and then retired Ravi Malick on a ground out to set the Royals down in order. In the bottom half of the inning, Brade led off with a single and proceeded to steal both second and third before Jason Bottenfield was walked. Bottenfield took second base and Brade scored when Kirk Sipila hit a sacrifice fly ball to center field to pick up the RBI. Hitzeman also walked and Lee followed with a single to score Bottenfield. With the Spirits up 2 to 0, Lee then stole second and advanced to third when Molldrem hit a sacrifice fly deep enough to score Hitzeman. Brant Finchum drew a walk to keep the rally going, however the Royals were able to get John Showalter to ground out and escape the inning down, 3 to 0.

Royals pitcher, Daniel Washington then kept Spirits hitters in check as he was able to escape both the second and third innings by allowing only three hits, however Brade was able to swipe second after reaching in the third, and later scored on a wild pitch to make the score 4 to 0, Spirits. Molldrem and company kept the Royals scoreless through four innings and the squad picked up a fifth run in the bottom half of the inning when Molldrem walked, took second, and then reached third on a ground out. He later scored on a sacrifice fly by Showalter.

The Royals decided to make things interesting in the fifth after Malick and Jeff Jones broke up the Molldrem no-hitter, each with a single. The Spirits were able to get John Crossley to ground into a fielder’s choice, but Crossley was able to swipe second and both he and Malick were able to score after Washington hit a deep single to left-center. Molldrem was able to get Ron Glenn and Michael Dossey to fly out, but the Royals were in business after cutting the score down, 5 to 2.

“I wouldn’t use the word nervous at that point,” Lee commented following the game. “You’ve got to hand it to the Royals. We’ve put a couple of big wins on them and they showed a lot of improvement, and more importantly, showed determination even though they were down five to nothing after four innings. They can hit, and when they cut the lead in the fourth, I was happy to see the guys shift gears and get down to business.”

With their lead nearly cut in half, the Spirits rebounded and rebounded big in the bottom half of the fifth. Patrick Bilgere grounded out to start off the inning, however Chris Lewis was able to reach after he was hit by a pitch. Earl German followed with a single to push Lewis to third, and Brade reached once again on a fielder’s choice, courtesy of an errant throw by the Royals shortstop, Dossey. Lewis was able to score on the blunder and German and Brade were each able to advance. With runners on second and third and one down, Bottenfield followed by reaching on another error by Dossey that allowed German to cross the plate. Sipila then singled to score Brade and later scored on a double by Hitzeman. Hitzeman was able to score the Spirits tenth and final run after Lee tripled to right-center field.

“Business as usual for these guys,” continued Lee. “Our guys can hit, and in just about every scenario this season, they’ve found the right time to do it and at times, even competed against the game when things were really in our favor. We’ll take every hit we can get. We’re a little selfish that way, but I love it. I was really happy to see us rebound after the Royals closed the gap.”

Molldrem and the Spirits defense buckled down for the game’s final two innings, including a shut-down seventh inning from German, who allowed just one single before the defense closed out the contest. Molldrem finished the games with six complete innings, allowing 3 hits, 2 earned runs, walking one, and striking out 7.

The team returns to action next Thursday night as they host the Cardinals at Reverchon Park in Uptown, Dallas. First pitch is scheduled for 6:30PM. 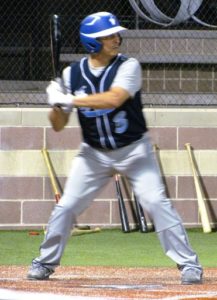