Spirits (35+) Implode Late to Hand One to the Knights

(July 9, 2020 – Carrollton, TX) You’ve heard it before. You’ll hear it again. The coveted, “Spirits inning.” The one time humorous phrase turned team motto at times reared its ugly head once again after the Spirits (35+) squad played a solid game against one of the NTABL Veterans League’s better teams Thursday night in the form of the Knights.

After leading most of the way, the Spirits watched a 6 to 2 lead evaporate in the evening’s heavy air as the team gave up 8 runs to the Knights in the sixth inning and watched what appeared to be a sure victory turn to a demoralizing loss. Offense was once again in limited numbers as the Spirits finished the night with just 7 hits compared to 10 from the Knights. Eric McPherson led the Spirits with two of those hits, finishing 2-for-3 with a run scored, an RBI and a stolen base. For the Knights, lead off man Javier Rodriguez finished with a 3-for-4 performance adding 2 runs scored and an RBI.

The Knights picked up an early 1 to 0 lead after Rodriguez led the game off with a single and advanced to second on a bad throw. He was able to tag on a fly ball to reach third and later scored on a wild pitch from Spirits starter, Duane Aponte. The Spirits followed suit by scoring a pair of runs in the bottom half of the inning after Cliff Brade led things off with a single and then swiped second base. He moved to third on a Knights wild pitch and after McPherson singled him home, the game was tied at 1 to 1. McPherson then stole second base and after he moved to third on a ground out by Kirk Sipila, he later scored on another Knights wild pitch. Shawn Lee drew a walk and then stole second, but Knights starter Carlos Soria was able to get Aponte on swings to end the inning.

After Nick Smith reached on a Spirits error and advanced to second on a wild pitch, he later scored on an RBI single from Dewey Leggit and the game was tied at 2 to 2. Things remained in check for the next few innings before the Spirits opened for 3 more runs in the bottom half of the third when Jonathan Duran singled and Shawn Hunt drew a walk. Both Brade and McPherson flew out, but the Spirits remained alive after both runners advanced on a wild pitch and Duran was able to cross the dish after yet another bad pitch. Sipila drew an infield single to put runners on the corners and an RBI single from Travis Hitzeman scored Hunt. Lee followed with an RBI single to score Sipila before Aponte grounded out to end the inning with the Spirits up, 5 to 2. 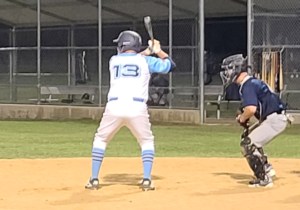 Brant Finchum digs in awaiting a pitch from Carlos Soria before drawing a base-on-balls. The Knights came back to defeat the Spirits, 10 to 7.

The Spirits made it 6 to 2 in the fourth after Chris Lewis reached on a Knights error and was replaced at first after David Tipton reached on a fielder’s choice. Brant Finchum drew a base-on-balls and Tipton later scored when the Knights tried to turn a double-play before Duran went down on strikes to end the inning.

The ghosts seemed to be on cruise control before all hell broke loose in the sixth. To save our readers from a two-hour article filled with negative and redundant adjectives, the Spirits could only watch the game slip away. Enter in 7 Knights hits, 2 walks and 3 Spirits fielding errors and “just like that” the team was losing 10 to 6.

The Knights turned to hard-throwing Haley Hougen to close things out but the Spirits were able to muster one more run to make the box appear respectable before it was over. Aponte takes the loss after giving up 10 hits and only 5 earned runs while walking one and striking out 5.

“Not a lot to say about this one,” Lee commented after the loss. “We stunk up the sixth, self included and couldn’t get off the field. That’s the second time Aponte has pitched well and we’ve done nothing to win the game for him. All we can do is forget it and move on. It’s hard for me to. I honestly hope it is for some of the other guys. I’m seeing a trend I don’t like and winning games has seemed to take a back burner stance for this organization. I mean, we’re here for fun, but we also want to play to a standard. We’re not all on the same page just yet and until that happens we’re going to be in some close ball games. Nothing but love for these guys though. I’d rather lose with this team than not play with them, that’s for sure. Hopefully we bring it next time.”

Next time will be in the form of the Dodgers as the team preps for an off-schedule Monday night make-up game at McInnish Park, Field #11 starting at 7:00PM. Click here for schedule details and to learn how you can listen to Spirits baseball games live!