Spirits (35+) Get Come Back Win on the Coattails of Sipila, Hitzeman

(August 6, 2020 – Plano, TX) It was a great night for baseball and the Spirits (35+) squad finally had the opportunity to play at the friendly confines of Graham Field at Prestonwood Christian Academy Thursday night in NTABL Veterans League action. The not-so-friendly portion of the evening’s match-up was having to face former Dallas Spirit and former MLB pitcher, DJ Carrasco as a number of Spirits hitters left with the opportunity to share with friends that there were struck out by the hard-throwing right-handed pitcher as the highlight of their night. Carrasco loaded up on 8 strikeouts in 4 innings of work, but it was the top two hitting Spirits that would later capture the headlines before the night was over.

The game quickly started in controversy after Cliff Brade grounded to the Knights infield in the first inning and reached on a throwing error to first. After the ball caromed back to Rodger Battani at first and he quickly relayed to second to try to catch the speedy Brade taking an extra base. The result was that Brade was easily safe on the play but the scandal was that the umpire at home plate of all places called him out.

“What a crappy way to start a game that you know with certainty is going to be a one-run game,” Shawn Lee commented later. “First batter of the game and we know that we’re facing an insanely good pitcher and the ump takes a runner from us. Would have been nice of the field up to show up to the game before the top half of the inning ended, but it is what it is.”

The miscue on judgement ended up costing the Spirits as Kirk Sipila picked up one of his two hits after Eric McPherson went down swinging and if Brade hadn’t scored on that play, he certainly would have on the next after Travis Hitzeman reached on an error. Lee made his way to the dish with runners on the corners and two down, but Carrasco made short work of the opportunity by setting Lee down swinging.

Fast forward to the bottom half of the second inning where controversy strikes again. After Carrasco flew out to start the inning for the Knights, Nick Smith reached on a single. Scott Bale followed by grounding to Brant Finchum at short and after the veteran infielder made a solid play from his knees, Bale was ruled safe at first after it appeared Finchum had thrown him out. Smith advanced to third and after Bale attempted to swipe second, he was gunned down by Spirits catcher, Shawn Hunt and it appeared the Spirits may get out of the inning. Jesus Marquez followed with another single however and the Knights picked up the first run of the game and led, 1 to 0.

Carrasco then struck out the side for a quick top half of the third, but the Spirits defense held its own behind pitcher, Duane Aponte and also set the Knights in order with 3 ground-outs. In the top half of the fourth in what turned into a pitcher’s duel, Grant Martin went down on strikes but Brade added some spark again after drawing a walk off of Carrasco. Brade was then able to steal second two pitches later and then moved to third when McPherson grounded out. Brade was then able to cross the dish on a passed ball before Sipila grounded out to end the inning and the game was tied, 1 to 1.

Aponte held the Knights scoreless in the bottom half of the fourth and with the same score heading into the bottom half of the fifth inning, the Knights rallied for another run after Bale singled and later advanced to second when Michael Kubick drew a walk. Battani reached on a fielder’s choice that squeezed Bale at third and with two on and two out, Keaton Hougen doubled to score Kubick. David Tipton cut off the gap shot and relayed to Lee at second base who turned and fired a strike to Hunt at the plate the Spirits were able to gun down Battani trying to score to get out of the inning down, 2 to 1.

After the ghosts once again went in order in the sixth while facing Hougen at pitcher after replacing Carrasco in the fifth, the Knights bounced back for another run to take a 3 to 1 lead after Stacy Scott singled and moved over on an error by Finchum. Aponte was able to get Javier Rodriguez on strikes and Carlos Soria to fly out, but Scott was able to score on an RBI single by Scott McCain and the Knights had a 3 to 1 lead before Aponte was able to get Carrasco on a ground out. 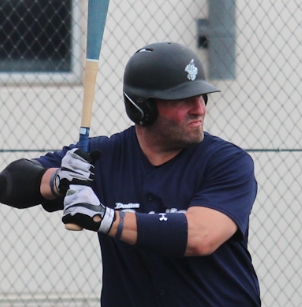 Kirk Sipila’s late game, 2-out double scored 2 runs to tie the game before Travis Hitzeman followed with an RBI single that proved to be the game winner. The Spirits beat the Knights 4 to 3.

With a sputtering offense that was facing two hard-throwing pitchers, the Spirits didn’t have a ton of confidence heading into the seventh and final inning of the game with the lower half of the lineup due. However, it was the patience of those hitters that started off a rally that would lead to a Spirits victory. Jonathan Duran drew a base-on-balls and was forced out at second after Martin beat out a fielder’s choice that easily could have been a double-play. The hustle proved important as Brade followed with a single to push Martin to second. McPherson went down swinging and with two on and two down, Sipila played the hero with a 2-out double that scored both runners and tied the game. Hitzeman followed with another single to score Sipila and to give the Spirits a 4 to 3 come-from-behind lead before Lee went down swinging to end the inning.

The Knights made it interesting in the game’s final frame after Smith singled and then advacned to second on an error by Brade in left field. Aponte was able to strike out Bale and after Marquez grounded out, the Spirits were poised for victory. Kubick was able to keep the Knights hopes alive after he singled to put runners at the corners, setting the stage for Battani to be the game’s hero. Battani battled Aponte with a great at-bat, going 7 pitches before Aponte was able to catch him off-balance for a called third strike to give the Spirits the win.

“What a great game,” continued Lee. “It seemed like every player had a bit of a role in the game and it wasn’t through your ordinary circumstances like getting that big hit or making that big play. There were a series of different events that kept runs off the board or innings alive for the offense. When we came up to bat that final inning, I was telling the guys they had to get the top of the order back up and man did they come through. Fantastic effort going against a great pair of arms like that for the Knights. It’s fun to win a game in dramatic fashion and Sipila and Hitzeman made sure of that with their late heroics. Those two guys are so clutch. And Aponte delivered tonight as well. What a great job from the mound and that can’t be talked about alone. Hunt did a great job behind the dish calling the game and making great decisions and throws. Great win to be proud of as a team.”

Aponte went the distance for the Spirits, going all 7 innings allowing 3 earned off of 11 hits while walking 2 and striking out 5. Both Sipila and Hitzeman led the Spirits box score with 2 hits each including Sipila’s double, run scored and 2 RBIs while Hitzeman finished with the game-winning RBI. Smith and Bale led the Knights, each recording a pair of hits while Carrasco (8) and Hougen (3) combined to strike out 11 Spirits in the loss.

The Spirits (35+) squad remains idle this week with a bye, but returns to action August 20th when they host the Thunderbirds on Graham Field at Prestonwood Christian Academy. Click here for schedule details or to learn how you can download the iScore Central app to listen to Spirits baseball games live online!