(July 15, 2018 – Dallas , TX) The offense was lit in Uptown, Dallas on Sunday night and the Spirits (18+) squad turned a game that was appearing to be a carbon-copy of previous weeks into a lead. They then turned the positive into a negative when they let that lead slip into a deficit, only to turn that around into a come-from-behind win over the Outlaws.

The Spirits used a 7-run sixth inning to take a commanding lead in a game that was, 2 to 0 in favor of the Outlaws at that point and appeared they’d coast the final three innings of play on their way to victory, but the Outlaws had different plans. The Outlaws rallied for a 5-run seventh to tie the game and after a 4-run eighth, the Spirits momentarily sat wondering what happened.

The Outlaws picked up 2 runs in the first off of Spirits starter, Holden Novak after Jordan Hebert led the inning off with a single. Brian Gaffeny battled a 8-pitch at-bat for a double that pushed Hebert to third. Adam Lasek followed with a double to score both runners and just like that, the Outlaws were in front 2 to 0. Novak didn’t appeared thrilled by the quick start and retaliated by picking off Lasek at second for the inning’s first out. Adam Gremillion drew a walk and David Humen singled to put two on with two out, but Novak was able to set down Brandon Wilkerson on swings to end the inning.

From there it was a pitcher’s duel, despite the Spirits sending a few base runners to the bags without fruition. Novak set down 12 straight before the Spirits offense finally awoke in the top half of the sixth inning. Duane Aponte reached on an error and moved to second after Humen, the Outlaws pitcher, struck out Cliff Brade and then gave up a single to Novak. Kyle Redinger followed with another single and Aponte was able to score on an error by the Outlaws shortstop. Teddy Croft followed with the team’s third straight single, good for a pair of RBIs that sent both Novak and Redinger across the dish. Up 3 to 2 at this point, John Showalter followed the get-on-base challenge by reaching on another error by the Outlaws that left runners on the corners with one out. Cody Bishop picked up his second hit on the evening by blasting a double to the wall that was good to score both Croft and Showalter. Looking to one-up the work of Bishop, Mike Werner followed by sending the first pitch he saw over the right field scoreboard for a 2-run homerun and the Spirits were up 7 to 2. Humen recovered to strike out Nate Martinez and eventually got out of the inning after Carl Suverkrop singled and Aponte grounded out.

Novak made it 15 straight by setting the Outlaws in order during the bottom half of the sixth but ran into trouble in the seventh after the Spirits were held scoreless in the top half of the frame. Hebert led off with a single and advanced to second after Novak hit Gaffney with a pitch. Lasek reached on a fielder’s choice that squeezed Gaffeny at second and pushed Hebert to third, but the real damage came from Kevin Brand. Brand took the next pitch from Novak over the wall at Reverchon Park for a 3-run blast that cut the lead to, 7 to 5.

After Gremillion followed with a single, Showalter turned to Kyle Pullins to relieve Novak and unfortunately the move didn’t pay off. Pullins was able to get Humen on a ground out that pushed Gremillion to second and he would later score on a single by Wilkerson. Wilkerson advanced to second on the throw to home and he then scored after Chance Tabor singled to tie the game at 7. The Spirits defense was able to retire Glenn Wilson, but the damage was done and the game was tied moving into the eighth.

Humen was able to set Showalter down on strikes, but Bishop made it hit number three for the Spirits after blasting a solo homerun over the right field wall to give the Spirits back the lead, 8 to 7. Werner followed with a single and Martinez wore a pitch to put runners on first and second, but Humen was able to get Suverkrop to fly out and eventually was able to get Aponte on a ground out to end the rally.

Up 8 to 7 and moving to the latter half of the eighth, the Spirits found themselves in trouble after Joey Welter led the inning off with a single. Evan Jeanise flew out to leave one on with one out, but Hebert drew a walk and Gaffney singled to load the bases. A base-clearing triple from Lasek put that knot back into the Spirits throats as the Outlaws went ahead, 10 to 8. Showalter then turned to Carlos Soto, who has struggled during the 2018 campaign and an eventual wild pitch allowed Lasek to score to make it, 11 to 8 Outlaws. Soto gained his composure some and was able to get Gremillion to fly out and to set down Humen on strikes.

Down by three runs and moving into the top half of the ninth, the Spirits rallied with another dose of high-octane offense. Brade led off the inning with a single and Novak was able to draw a walk. Conner Camacho, who replaced Redinger due to a leg injury went down on strikes and the Spirits had two on with one out. Croft was also patient at the plate and drew a base-on-balls to load the bases for Showalter. Humen was able to work his way to a 3-2 count, and after previously striking out Showalter, the Spirits third baseman returned the favor so to speak by belting a single to right field that scored both Brade and Novak. Both runners advanced on a wild pitch from Humen and Bishop delivered for the Spirits by belting another double to the right field wall that scored both Croft and Showalter and gave the Spirits a 12 to 11 lead. Humen was able to get out of the inning after he and his defense retired Werner and Martinez, so the game moved into the proverbial bottom-of-the-ninth scenario.

Showalter turned to his young gun, Camacho to close out the game and Camacho did just that. Camacho struck out both Wilkerson and Tabor before getting Wilson on a ground out to seal the victory for the Spirits. Lasek finished the game with 2 hits, 2 runs scored, and 5 RBI to lead the Outlaws.

“What a great way to get a win,” commented Showalter after his team’s victory. “It’s our second straight come-from-behind win and I can’t appreciate the effort enough by the guys. (Cody) Bishop had a ridiculous night for us and Novak pitched a great game for us as well. The offense really produced tonight and it was nice to see Cody (Bishop) and Mike (Werner) lead the way with big blasts tonight. Soto picks up the W for us on the mound, but more importantly, we’re hoping he gains some confidence from that appearance tonight. Tip of the cap to the Outlaws for a great game. That was fun!”

The team returns to action on Wednesday night when they host this same Outlaws squad at Graham Field in Carrollton. With percentage points separating the top three teams, each squad will determine its own destiny battling for the number one seed moving into the playoffs. The Spirits will repeat tonight’s and Wednesday night’s match-up against these very same Outlaws one last time next Sunday before closing out the regular season with The Dark Horse on August 1. Click here for Wednesday’s game details, to obtain driving directions, or to download the iScore Central app to virtually watch and listen to the game live, online! 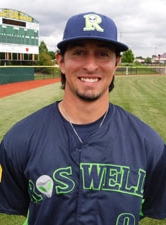