Spirits (18+) Take Down Pelicans in Battle of Top Teams

(May 16, 2017 – Dallas, TX) Tuesday night’s game at Reverchon Park in Uptown found the top two teams in the NTABL Open American League facing off for the last time in the regular season. The second place Spirits (18+) squad entered the game riding a 5-game winning streak and a record of 9-2, while the Oak Cliff Pelicans entered the game with a win streak of their own, standing undefeated in first place with a perfect, 9-0 record. The match up between the two squads went in the favor of the Pelicans back in April, when the Pelicans jumped on the Spirits early and fended off a comeback to hang on, 15 to 10. With playoff seeding implications and tie breakers in mind, the Spirits showed up prepared to bring the regular season head-to-head results to even at one game apiece.

Both teams added new blood to their starting rotations, featuring Robert Linebauh, a pitcher out of Eastfield College for the Pelicans and Teddy Turner, a standout pitcher from Trinity University for the ghouls. As the game started and the Spirits took the top half of the first inning, they wasted little time in welcoming Linebaugh and getting the scoring started. Cliff Brade continued to campaign for another All-Star appearance by taking a 1-0 fastball hard into the right-center field gap for a double. He advanced to third on a wild pitch to number two hitter, Teddy Croft and Croft followed by reaching on a walk. This brought up team RBI leader, Mike Werner with two on and nobody out. Werner saddled up and battled Linebauh for 8 pitches before grounding a chopper back to him, however Brade was able to use his speed to advance home as the Linebaugh made the play to first base to record the out. This brought up Spirits clean-up hitter, Collin Stacha. Linebaugh, who appeared to be having some trouble locating his pitches or perhaps he didn’t want to make a mistake to the powerful hitter, walked Stacha on four straight pitches. This put runners at the corners after Croft took third on a wild pitch, giving third baseman and team manager, John Showalter an opportunity to add to the lead. Showalter took a fastball to medium depth right field on a hard line, which appeared to have sacrifice fly potential, however it was tagged so sharply that Croft wasn’t able to get back to the bag to tag on the play. The fast out left runners at the corners with two down before Spirits relief pitcher and infielder, Mitch Abeita once again showed his patience at the plate by working a 6-pitch base on balls to load the bases. With early pressure on the Pelicans, hot-hitting Duane Aponte approached the plate with the bags full. Aponte quickly jumped on the first pitch from Linebaugh to flare a high-arcing shot into no-mans-land in short right field. As the Spirits runners advanced on contact, the ball found the turf and the Spirits were able to put two additional runs across the plate before Linebauh was able to get Carl Suverkrop looking.

The Pelicans managed to earn two runs of their own to draw the score to 3-2 after after putting up a run in both the bottom of the first and second innings. In the top half of the third, Croft again throttled the Spirits offense with a single up the middle to put the lead off man aboard. Linebaugh was able to set both Werner and Stacha down in order, but lost a full count battle to Showalter and the walk put runners on first and second with two outs. Abeita quickly followed by crushing the first pitch he saw off the left-center field wall for a base-clearing double, and the Spirits were back in business with a 5 to 2 lead.

With the added insurance, Turner began to find his groove as the team headed into the Pelicans half of the third. Turner set down the Pelicans in 1-2-3 fashion by getting Kevin Beck to fly out, striking out Nathan David, and then getting Stephen O’Roark to fly out. The Spirits however, didn’t appear to be finished knocking around the Pelicans hurler. In the top of the fourth, Suverkrop reached on a single and then advanced to second on a ground out by Thomas Stoltz. Shortstop, Nate Martinez patiently drew a full-count walk to put two men on with one out. After a Steven Baker strikeout, Brade returned to the plate eager to continue his hitting streak. After both runners advance a base on a wild pitch from Linebaugh, Brade hit what should have been a routine grounder to second base. The throw to first missed its target allowing Brade to reach safely and allowing both Suverkrop and Martinez to score. Brade then stole second and Croft followed with another slowly hit grounder to second. In no rush to complete the out, the Pelicans second baseman overlooked the speed of Croft and Teddy was able to beat out the play.

Following the game and when asked about the play, Showalter noted, “there aren’t many catchers out there that can beat out a ground ball to second base for an infield hit, but Teddy can. The kid has great speed!”

As the momentum for the Spirits continued, Werner was next up to the plate and he continued to update his team-leading RBI total by taking an 0-1 pitch into the right-center field gap for a bases-clearing double. With a commanding 9 to 2 lead, Pelicans manager, Patty Evans appeared to have seen enough from Linebaugh and his rough welcome to the NTABL. Evans called upon reliever, Bruce Mathes to try to stem the tide of Spirits scoring, but unfortunately for the Pelicans and Mathes, the Spirits would plate one final run as Werner, who had advanced on the throw during his double was able to take home following a wild pitch.

During the game’s final three innings, both teams remained quiet. The Spirits looked to relief pitching from both Abeita and Croft and the two provided some shutdown innings and Mathes and Kevin Mayo worked together to calm the Spirits bats. After six innings complete, the Spirits sealed their 10 to 2 victory to end the Pelicans perfect run bid, handing the squad their first 2017 loss, while the Spirits secured their tenth victory and a virtual tie with the first place Pelicans.

“This win means a lot to the team and for the season moving forward,” continued Showalter following the game. “The Pelicans are a great team with some great hitters and I felt we matched up with them well. If you want a measuring stick on where your squad stands, the Pelicans are currently it for this season. We have a tough second half schedule and securing this victory will hopefully go a long way in keeping our momentum up as we face the challenges ahead.”

The Spirits return to action next Sunday afternoon as they travel to Graham Field and the host Orioles. First pitch is slated for 2:00PM and you can click here to view schedule details or watch the game live online. 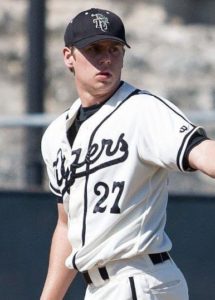