(June 12, 2019 – Euless, TX) The Spirits (40+) squad returned to the win column on Wednesday night as they held on to beat the Otters by a score of 7 to 5 in DFW ABA league play. The team used 10 hits, including 3 from Kirk Sipila and a solid performance by Earl German on the mound to even their record back to 6-6. A steller night defensively by shortstop, Brant Finchum also sparked the team and its momentum throughout the game as Finchum displayed several acrobatic and key defensive stops to help carry the squad.

The Otters drew first blood with a run in the top half of the first inning after Kevin McEnna led the game off with a single and then stole second base. A single by Oscar Ronquillo pushed McEnna to third and he later scored after Dan Sosa grounded into a 4-6-3 double-play.

The Spirits quickly made a move offensively in the bottom half of the inning after Eric McPherson and Stacy Scott reached on errors to lead things off. Sipila loaded the bases with a single and the Spirits instantly went into ‘left-on-base’ mode as Shawn Lee popped up the first pitch he saw to third base and Patrick Bilgere and David Tipton went down on strikes.

With the same score heading into the bottom half of the second, Chris Lewis stepped up with a triple to the right field wall to give the Spirits a runner in scoring position and some refurbished momentum. The squad didn’t squander the opportunity following a quick coach’s chat from Sipila in an attempt to motivate his team after their first inning face-plant. Lewis was able to score on a ground out by German and the game was tied at one.

The Otters rallied however, picking up 2 more runs in the third after McEnna doubled and Ronquillo singled with one out. Ronquillo stole second to put both runners in scoring position and a single by Paul Taylor scored both runners to make it 3 to 2, Otters.

The Spirits quickly tied the game in the bottom of the third after McPherson reached on another error and later stole second. He would later score on an RBI single from Sipila and a single by Lee added another base runner for the ghosts. Bilgere flew out and it appeared the Otters may escape the inning, but David Tipton reached on catcher’s interference and Lewis wore a pitch from Sosa to score Sipila and to tie the game at, 3 to 3.

The Spirits rallied for 3 more runs in the fourth after John Hefner singled with one out. McPherson followed with a triple to the left-center field gap to score Hefner and Scott reached after wearing another Sosa pitch. Sosa made a move to keep Scott close at first and McPherson noticed the move while leading off third and simultaneously broke for home plate and successfully stole home on the throw over to first as the Otters first baseman wasn’t even close in catching and relaying the ball home. Scott eventually stole second base and was able to complete the little league-style trip home after the Otters catcher launched the throw to center field and the center field followed up by muffling the relay back.

Leading 6 to 3, the Spirits went on to add an additional run in the fifth after Tipton led the inning off with a single and advanced to second on a wild pitch. He was pushed to third after Lewis grounded out and an RBI single from German scored him to give the Spirits a 7 to 3 lead.

Feeling that they perhaps had enough runs in place to walk away with a win and heading into the game’s final inning, the team left the victory column on hold as they allowed the Otters to make things interesting before the game came to a close. German beaned the first hitter he faced in the seventh and just like that, the Otters had a runner aboard. McEnna was able to steal second and a ground out by Ronquillo pushed him to third. He then scored on a single by Sosa and another single by Taylor pushed Sosa to second. German was able to get Jim Johann on strikes, but another single by Doug Poe scored Sosa and the lead was cut to, 7 to 5 with the tying run aboard. German was able then get Samuel Huniu to ground out to end the game.

The victory brings the team back to .500 as they head toward the final stretch of regular season play with 4 games remaining before playoffs begin. The squad is scheduled to visit the Redbirds once again on Legends Field at Texas Star Complex next Wednesday night. First pitch is scheduled for 8:45PM and you can click here for schedule details.

DMIS Manged IT Services Players of the Game 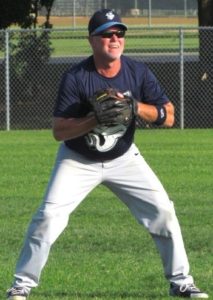