Molldrem Stikes Out A Dozen, Falls One Out Short Of No-Hitter

(April 28, 2016 – Dallas, TX) The Dallas Spirits Baseball Club witnessed greatness this past Thursday night, as former Marlins prospect Craig Molldrem brought his stuff…and his stuff was on fire. Molldrem struck out 12 Cubs hitters and went to the game’s final out with a no-hitter before Cubs slugger Jimmy Richardson slapped a single to opposite field and just over the head of SS Eric McPherson.

“He’s something else to watch,” mentioned Spirits (35+) manager Shawn Lee following the contest. “We were keeping it on the down low and I checked on Craig after 5 innings. He wasn’t aware of the no no, but he was obviously in control of the strikeout this evening. I’ve got to be honest, I feel responsible for blowing it for him. That’s not a thing you discuss, too taboo. I checked on him and he was ready to let our closer come in. I thought of a few options to trick him into staying out there, but the felt guilty that I may be pushing him. So I brought it up. A true baseball fail. I asked him if he wanted to keep control and he jumped to the opportunity.”

And Molldrem meant business. He set the Cubs down in order in the 6th setting up the 7th and final inning. The Spirits defense promptly put the first two Cubs down in order with the help of some solid fielding by McPherson. Enter Cubs slugger Jimmy Henderson. Henderson slapped a single just over the head of the Spirits shortstop and the no-hitter was lost.

“You know, I think it mattered way more to some of us, than Craig. There’s a few of us that are big fans of his big arm. He’s such as class act and humbled athlete. He didn’t sweat a thing. And we have to hand it to Bobby Caltibiano and the Cubs. They were class acts the entire game and after the finish. It was a great game to be part of.”

The Spirits put up a solid offensive performance with 5 runs on 7 hits and only one error in the field. Utility man and pitcher Jonathan Duran stayed hot with another single in a 1 for 2 performance. Newcomer Clifford Brade added a 2 for 3 performance with a pair of hits, 1 RBI, and a run scored. 2B Jason Bottenfield also had a single, a run scored and a pair of RBIs. The club returns to action next Thursday night as they host the Braves at Reverchon Park in Uptown, Dallas. First pitch is at 8:45PM. 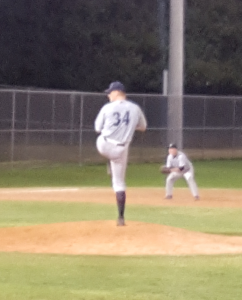