(October 7, 2018 – Dallas, TX) They were in control the entire game, but a fire ignited in the Spartans in the seventh and the Spirits (18+) squad saw there 2 to 0 lead turn into a 3 to 2 loss Sunday night at First Baptist Academy in NTABL Trinity Division fall baseball play.

The Spirits earned a quick 1 to 0 lead after Eric Goetz led the game off with a single. He was able to advance to second when Sam Tanner grounded out and appeared he may be stranded after Mike Werner went down on swings. Slugger, Cody Bishop played hero with two outs with an RBI single to score Goetz and the Spirits remained on top after Teddy Croft grounded to end the inning.

Despite a walk to the lead off hitter, Alex Casimiro by Spirits starter, Holden Novak, the team was able to get out of the inning in 1-2-3 fashion after spinning a pair on Thomas Kramer, who lined out. The Spirits were able to double-up Casimiro on the play for the force out and Novak proceeded to strike out Jake Gibb to protect the lead.

Things remained quiet as both offenses sputtered against opposing pitching until the seventh and final inning when the Spirits were able to boost the lead to, 2 to 0. Bishop doubled with one out and a fly ball by Croft made it two out before Kyle Redinger was able to draw a walk. Novak followed with a key single to score Bishop and the insurance run appeared to be enough as the Spirits had held the Spartans to just one hit up to this point. Colton Buckner was retired to end the Spirits offense for the night and interim manager, Duane Aponte turned to newcomer, Adam Bartczak to close.

It appeared to be business as usual, however after getting Kramer to ground out to start the inning the Spartans offense exploded with five straight base runners proceeding to reach base safely to record a walk-off, come-from-behind win. Gibb singled with one out and advanced to second when Glen Wilson reached safely on a single. A triple by Tyler King scored both runners and the game was tied. Cory Press drew a walk off of Bartczak and a single by Jeff Hamm left the Spirits stunned and with another loss.

The loss drops the team’s record to 2-3 at the midway point of the fall season, but also leaves them in a pack of seven teams fighting for the fourth place position within the division. Should the team come up with a few wins in a row, they’ll be in a great position moving into the fall playoff season. The team is scheduled to return to action next on October 23 at 6:45PM when they once again host the Spartans at McInnish Park #10 in Carrollton. Click here for schedule details, to obtain driving directions to the game, or to download the iScore Central app to watch and listen to the game live, online. 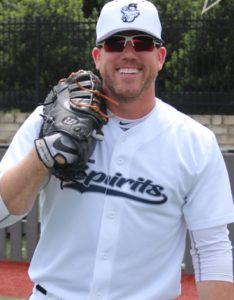