(June 9, 2016 – Dallas, TX) When you’re hot, you’re hot. And when you’re not, well most know the rest to that old adage. IF/P/OF Jonathan Duran stayed hot with a pair of hits, including a double and a run scored as the Dallas Spirits (35+) Veterans squad handed league-leading Modoc its first loss of the season. A number of Spirits hit the ball well including newcomer, John Show. Show added a pair of singles and an RBI as did OF Cliff Brade. Brant Finchum added a pair of hits as well to continue his streak, and the team saw additional offense from OF David Tipton, SS Eric McPherson, 1B Chris Lewis, and P Craig Molldrem.

Molldrem once again delivered from the mound sending 9 Modoc hitters back to the dugout with a strikeout. Molldrem earned his third victory closing out 5 innings, with no earned runs and only giving up 3 hits. Brant Finchum was solid in relief as well. Finchum went 2 innings to close the game, allowing only one hit and striking out 2.

“The defense was extremely solid,” noted team manager Shawn Lee following the game. “Craig was solid as expected and it was nice to see Finchum come in and bring some quality pitches to seal the deal. For some reason we never know what kind of defense we’re going to hand Finchum, but today it was great.”

Outside of a few miscues at the plate by C Jason Reyes, the team was error-free. And there wasn’t much blame to lay on Reyes. Reyes took a Molldrem fast ball off of a foul swing to his catcher’s mask early in the second inning. He appeared to be a little slow getting the glove on pitches outside of the zone, which cost the team a couple of bases and a run due to past balls. As the team walked off following the second, Molldrem noticed that Reyes was out of sorts. After a quick review of Jason’s status, the team immediately replaced Reyes at catcher and got him medical attention. Hours later, it was reported Reyes was in good condition after suffering a minor concussion. Details as to when Reyes may return to action are currently under review.

With the victory, the team increases its record to 3-1 and falls just a half game behind Modoc for first place in the NTABL Veterans League Standings, holding the tiebreaker with the win. The Dallas Cardinals also share a spot in the first place position alongside Modoc with a record of 4-1. The Spirits (35+) squad returns to action next Thursday night with a location to be determined as they host the Cubs at 6:45PM. 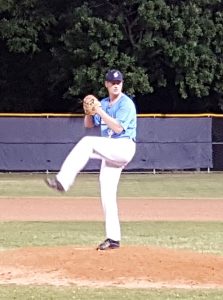 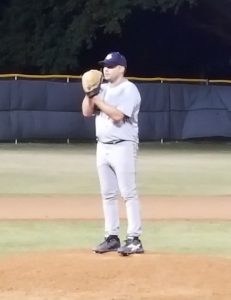