(February 27, 2019 – Grapevine, TX) Temperatures plummeted Wednesday night in just a couple of hours and a deep freeze set in around the Dallas metorplex as temperatures went from a damp 60 degrees to an icy 30 degrees. With winds blowing from the North off of Lake Grapevine, the ‘real feel’ was showing 19 degrees while the Spirits (40+) offense and defense displayed a freeze all its own. 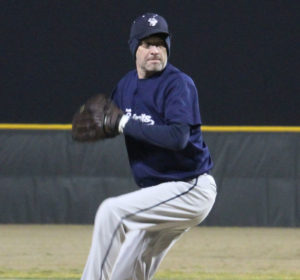 The Spirits made their debut in the DFWABA League and opening day at Oak Grove Park wasn’t a terribly friendly one. In a night that may have made zero sense to play baseball, the team lacked ambition to get its first win. Conditions made it nearly impossible for last year’s NTABL Pitcher of the Year, John Holmquist to grip the ball and to find consistency in the zone. And for pitches that were close, he wasn’t getting any help from the plate umpire. Neither team seemed to favor the cold, but for some reason it appeared to have less of an impact on the Drillers. Starting pitcher, Phil Varrichio went the distance during the shortened game to pick up the win after pitching all five innings allowing 1 earned on 7 hits, while waking and hitting 1 and striking out 5 as the Drillers upended the Spirits by a score of, 5 to 2.

The Spirits picked up a run early during the top half of the first inning when Brant Finchum went down on strikes, but was able to scamper to first when the Drillers catcher dropped the third strike. Finchum advanced to second when John Hefner smashed a line drive to right and the Spirits were in business with two on and nobody out. Both runners were able to advance on a wild pitch and Kirk Sipila followed with a slow roller directly to the pitcher and Finchum was tagged out easily trying to score. The blunder gave the Spirits runners at the corners with one down and Shawn Lee followed up with another fielder’s choice that was good enough to score Hefner.  Lee and Sipila both ended up safe after Sipila beat the tag on the play at second. Newcomer, Stacey Scott followed up with a line drive up the middle that quickly saw the roar from the dugout go cold as the night’s air as the Drillers shortstop played the ball perfectly to snare the liner and to force Sipila out at second for the double-play. The irony of the play was the Spirits would see the same exact play unravel three times before the game was over.

Up 1 to 0 and heading into the bottom half of the inning, Holmquist struggled a bit by walking a pair of Drillers, but the Spirits defense remained in check to shut down any thoughts of scoring after a double-play and a fly ball ended the rally.

The Spirits were silent in the second despite a solid single by Eric McPherson, who finished with two hits on the night. The Drillers found some offense with some help by the Spirits in the bottom half of the inning after Nelson Alvarez reached on an error. Alvarez later stole second and Holmquist appeared to obtain some control in the inning after striking out the next two hitters he faced. Alvarez was able to score, however after Will Nicholson doubled down the line and the game was tied at one. Nicholson was then able to score on another Spirits fielding error and despite a walk to Chris Allen and a single by Michael Tedder, the Spirits were able to get out of the inning down, 2 to 1.

Hefer was able to draw a walk in the third and Sipila singled to put two on with one out, but Varrichio was able to win the battle against Lee following an 8-pitch at-bat that resulted in Lee popping up to Varrichio. Scott was then hit by a pitch to load the bases, but Varrichio rallied to get Brian Hackney to ground out and the Spirits attempt to score was left on ice like the rest of the field’s atmosphere.

The Drillers then broke things open in the bottom half of the third after Scott Swingle drew a lead off walk and Gary Jackson singled to move Swingle to third after he previously swiped second. Holmquist was able to get Mike Basileo to ground out and Alvarez on swings, but Swingle was able to score on the ground ball and Jackson later scored on a wild pitch before Holmquist ended up walking Daniel Smith. Sipila then came in to replace Holmquist after he walked Augie Guzman and a Nicholson welcomed Sipila with an RBI single to make it 5 to 1, Drillers. Sipila was able to get Joe Norris to ground out to stop the bleeding.

The game remained cold and quiet until the fifth when Sipila doubled with one out and Lee followed with a single. Scott was able to score Sipila with an RBI single and the Spirits appeared to be in rally mode with two on and one out. Hackney took to the dish to play hero, but his line drive toward the third base line was snared by the Drillers third baseman and the team was able to pick off Lee at second, who had jumped on contact and just like that, the game was over due to time constraints.

Sipila and McPherson each finished the evening with a pair of hits while Hefner, Lee and Scott each added a hit and some additional box score data to round off a limited night of offense for the Spirits. The team is scheduled to return to action next Wednesday night as they play host to the Renegades at Oak Grove Park in Grapevine. First pitch is slated for 6:45PM on Field H and you can click here for game details or to obtain directions to the game. 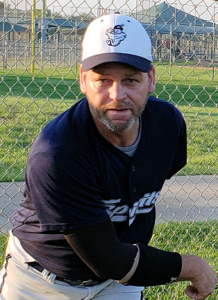