(June 4, 2018 – Plano, TX) With a name like the North Dallas Bulls, you’d expect more of a fight. There wasn’t much of a running of the bulls on Monday night at Graham Field as the only running appeared to be from beating out an extra base hit or taking an extra bag as the NTABL Masters League match-up between the Bulls and the visiting Spirits (45+) wasn’t much of a contest.

The Spirits used some early offense and some free stolen bases to quickly run up the score on the Bulls before they attempted to make a game out of it. The unusual behavior started at the beginning of the game after Chris Lewis drew a walk and realized that Bulls pitcher, Paul Adams was going from the wind up. Lewis quickly and easily took off for second and then third in what turned out to be a bit of a merry-go-round style of reaching base and making it to third. The Bulls made no attempt to keep Spirits runners from advancing or stealing and the ghosts quickly ran up the score to 9 to 0.

“That was different,” mentioned club manager, Shawn Lee following the game. “They (Bulls) have a great bunch of guys playing for them, and there’s certainly a few guys that can hit the ball. We were a little surprised by them not putting up a fight. I think they may have been trying to get a few guys the opportunity to play and develop at certain positions, but I don’t want to put words in their mouth. They put together a solid come back and made a game of it, but the early going was a little strange for us, that’s for sure.”

Speaking of nine and zero, the win takes the Spirits overall record to 9-0 on the season and atop the NTABL Masters League standings at the midway point of the season. The Spirits picked up 4 runs in the first when Lewis walked, stole second, and was balked to third. He eventually scored on a wild pitch from Adams and Patrick Bilgere then followed with another base-on-balls. Bilgere promptly took second and third for free and scored after Kirk Sipila singled. Sipila was squeezed at second after Guy Koenig reached on a fielder’s choice and Koenig then took his turn at free swipes of second and third. Koenig scored on another wild pitch from Adams and Lee followed up with a single and advanced to second after the ball was juggled in left field. Lee eventually reached third after Eric McPherson reached on a Bulls fielding error and the third wild pitch of the inning from Adams was good enough to score Lee to make it 4 to 0 before John Holmquist grounded out.

The Spirits picked up 2 additional runs in the second after Brian Hackney reached on an error and later scored on another fielding error. Koenig hit an RBI single to score Lewis later in the inning after Lewis reached on a single of his own. The score grew to 9 to 0 in the third after McPherson led off the inning with a single and stole second and ended up reaching third on a wild pitch. He later scored on an RBI ground out from Holmquist and Lewis picked up another single and later scored after Bilgere chased the right-center field wall with a triple. Bilgere eventually scored on a double by Sipila.

Bilgere replaced Sipila at pitcher in the bottom of the fourth inning after Sipila provided the Spirits with a solid effort in his three innings of work. Sipila, who appeared to be out for the season with regards to pitching due to a UIL injury during the Las Vegas Kickoff Classic gave up just 2 hits and no runs, while striking out 2 Bulls hitters. Sipila, typically a side-arm/submarine type of pitcher chose to change his motion to overhand and appeared to have effective command of his pitches. Bilgere, fresh off of pitching 25 years ago was solid before struggling to find the zone to a few hitters. The Bulls rallied for a run in the fourth and added 4 additional runs in the fifth. Bilgere completed 1 and a 1/3 innings, giving up 5 runs on just one hit, while walking 7 and striking out one before being replaced by Koenig, who finished the game for the Spirits.

The Spirits added 4 additional runs to close out the game in the top half of the sixth after Sipila singled and then scored on an double to the left-center field wall by Jack Nash. Nash stole third and scored on a RBI single by Lee, who picked up his third hit on the evening. Lee advanced to second on a wild pitch and McPherson drew a walk to put two on with one out. Enter once again, John Holmquist. Holmquist, typically a starting pitcher for the Spirits brought his 6 foot 6 inch stature to the plate and followed up by belting a fast ball to the right-center field gap for a double. Both Lee and McPherson scored on the play. “Big John,” as his teammates call him, appeared he might try for three but was quickly shut down by his dugout, collectively playing coach as they cheered on his effort and advised him to keep it to double. Holmquist’s 2 RBIs closed out the scoring as the Spirits finished with a 13 to 5 victory.

The team returns to action next Monday night as they visit the Caddo Reds at Graham Field. First pitch is scheduled for 8:45PM and you can click here to view schedule details, obtain directions to the game, or download the iScore Central app to watch and listen to the game live online. 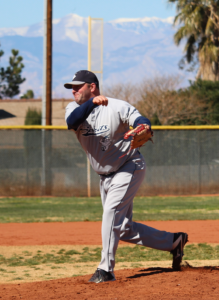